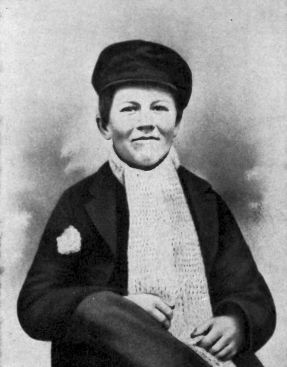 Let me introduce you to a young boy. His name is Thomas and he is naturally bright, savvy and streetwise. He is not afraid of hard work or long hours and is innovative and enterprising. His story is very relative to what we see happening in America today.

Thomas family fled their native country and found shelter in the US. The boy’s father had become involved in a political reform movement in his home country. The government there were extremely corrupt and power lay in the hands of just a few. This small group dominated the church, business and political institutions. A couple of recent bad harvests had only made matters worse. The people were starving, impoverished and desperate. The Government failed to act and simply ignored their plight. The Reformers were inspired by similar movements in other countries. They believed in ideas such as democracy, equality and liberty. The reformers slowly grew in number, meeting in private dwellings and later in public houses and taverns. As the movement spread the ruling elite began to get nervous. Armed supporters of the Regime began to attack the Reformers and break up their meetings.

Gradually the reformers became more radical and believed that only physical force would advance their cause. In the wake of an election to the ruling assembly there was evidence of vote rigging by the State. Soon the country was in open rebellion and Thomas’s father was involved. Despite initial success the Military and Government-backed militias use dtheir overwhelming force to decisively crush the revolt. The leaders were rounded up and put on trial, many were imprisoned and some were executed. Reformist supporters become victims of sectarian vigilante mobs.

Defeated and despondent Thomas father decides that they must leave. They cross into the US at night without any visa or green card and eventually settle in a small town in Ohio. Thomas finds school hard. He is easily distracted, his concentration span is short and the teachers find him difficult to handle. Thomas mother eventually decides to teach him at home and he quickly develops a voracious appetite for reading and learning. Thomas never returns to formal education but this is no hindrance to him in the land of opportunity, for he will go on to become a hugely successful businessman known all over the world.

Thomas’s life is an example of that all too elusive “American dream” – he is the embodiment of the self-taught, hard grafting self-made millionaire. This is a guy who made it big. The boy we are talking about is none other than the renowned inventor Thomas Edison. Edison’s father Samuel was a political refugee[i] from colonial Canada ….. Yes you did read it right, Canada! Edison invented the light bulb thus it would be remiss of me not to use the analogy of him enlightening the lives of his compatriots, and at the same time inventing a new pastime, dusting!

Sadly the modern day Edison family would find America to be a very different place. We must ask ourselves if young Thomas Edison were around today where would he be? Could he possibly be on a flimsy raft in the middle of the Mediterranean or Aegean Sea? Would he be shivering around an open fire in a Serbian detention camp? Perhaps he’d be getting ready to move in to a converted Hotel in Roscommon? Is the person who will finally find a cure for cancer amongst these desperate people?

The majority of the residents of the US are the descendants of refugees of some kind or another – they might be like Edison’s father, a political refugee, or perhaps their ancestry lies with some of the millions of Irish and Italians, fleeing famine and poverty. America has benefitted from these refugees; it is they who made America great. Trump’s malignant narcissism will destroy America and diminish whatever small bit of light she has left as a beacon for the rest of the world. America cannot hide away in isolated paranoia,  no more than Trump can solve its problems by creating scapegoats to prop up his alternative truths. Perhaps the better policy to pursue is the one the great Walt Whitman counselled ‘Keep your face always toward the sunshine – and shadows will fall behind you’. A big wall creates a big shadow and soon America will need a new Edison to take them out of this darkness.

The morning frost heralded the low January Sun to bathe its light on the neat patchwork of fields around Coolera, County Sligo. As we climbed the ancient hill of Knocknarea, Yeats words came floating over the shrill air;

“The wind has bundled up the clouds high over Knocknarea,

(W.B Yeats ‘The Wanderings of Oisin’) 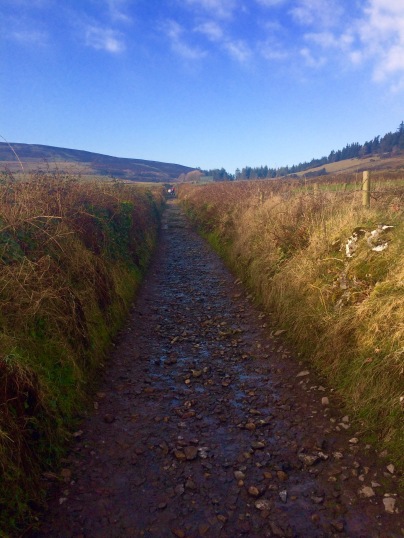 It must be ten years or more since I last climbed this beautiful summit – its distinctive outline bookends the southern end of Sligo Bay with the majestic Ben Bulben to the north. The pathway has been well maintained and access is comfortable even for those of us with moderate fitness.

A few steep rocky climbs near the top are the only challenging obstacles that lie before the famous Neolithic Cairn that crowns the summit finally comes into view. The Cairn is the reputed burial place of the legendary Queen Maedbh of Connaught. Indeed the landscape stretched out below is abundant in ancient portal tombs and passage graves, making this area as important to archaeology as the better known Bru na Boinne on the east coast[ii].

The Grave of Maeve, Queen of Connacht

One cannot help but feel that you are literally tracing the footsteps of our ancestors as you approach the top. The views when you get there are spectacular. The infinite expanse of the Atlantic stretches out below, becalmed today, as it laps up gently against the shore at Strandhill. Across the entrance to Sligo Bay lies Rosses Point with its famous strand, beyond that Lisadell House, home of Countess Markievicz, and Drumcliffe graveyard where Yeats now lies in eternal peace, casting a cold eye on us all. In the distance can be seen the hills of Donegal and the mighty cliffs of Sliabh League.

Inland is the aforementioned Ben Bulben, majestically carved by glacier, wind and rain into its unique undulating face.  It was in the heather atop this iconic Mountain where the mythical Diarmuid and Grainne found themsleves confronted by a wild boar. As the young warrior shielded his lover (the most beautiful woman in Ireland) he fought off the boar and after a ferocious struggle killed it with his sword. Sadly the story did not have a happy ending. The brave Diarmuid in saving his lover was alas fatally gored by the Boar and died soon after in Grainne’s arms. In the further distance lie the Dartry Hills and the peaceful glens and mountains of North Leitrim, a hill walker’s paradise.

Later we drive along the northern shore of Lough Gill and view the Lake Isle of Innisfree where Yeats intended to arise and go to:-

And a small cabin build there, of clay and wattles made;

Nine bean rows will I have there, a hive for the honey bee,

And live alone in the bee loud glade.

And I shall have some peace there, for peace comes dropping slow,

Dropping from the veils of the morning to where the cricket sings;

There midnight’s all a glimmer, and noon a purple glow,

And evening full of the linnet’s wings.

I will arise and go now, for always night and day

I hear lake water lapping with low sounds by the shore;

While I stand on the roadway, or on the pavements grey,

I hear it in the deep heart’s core.

We are now into  County Leitrim and our first stop is at Parkes Castle which although closed for the winter is still a worthwhile stop. The building is not really a Castle as such but a 17th Century Manor House built by the Planter Robert Parke. Its main purpose was  defensive as Parke had recently acquired lands confiscated from the local Gaelic Chieftains, the O’Rourke’s, traditional rulers of the Kingdom of Breifne.

A few miles on further along this picturesque lake side road lies the neat village of Dromahaire. The town sits on the banks of the River Bonet and was the seat of the O’Rourke’s and the Franciscan Abbey at Creevlea. We drive north towards Manorhamilton before turning left on the N16 and into the valley of Glencar. A few miles on we turn off and drive down to the lake of the same name and visit Glencar Waterfall. The Discover Ireland website states “while not the highest waterfall in the area, Glencar Waterfall is generally considered the most romantic and impressive”. The enchanting waters cascading into the leafy glen also inspired the National Poet:-

“Where the wandering water gushes

From the hills above Glencar,

In pools among the rushes

That scarce could bathe a star,

We seek for slumbering trout

And whispering in their ears

Give them unquiet dreams;

From ferns that drop their tears

Over the young streams.”

The Waterfall is easily accessed from the lakeside car park along a well maintained pathway. Also at the entrance is a charming little coffee shop called “The Teashed”. The staff were very friendly and welcoming and as coffee shops go the food here was excellent and not too pricey.  The fare consists  of freshly baked scones and bread, various sweet goodies, a wide choice of freshly made sandwiches, wraps, paninis, salads and hearty homemade soup. There are lots of local crafts on sale. The site has a playground – useful to rid the young ones of any pent up cabin fever. This is also the perfect spot for weary limbs to recover from hiking in the hills above. The outside tables would be a lovely place to sit out in the warmer months. [iii]

All along the lake are many places where one could have a nice picnic. We caught a lovely sunset on the lake as the weak winter sun surrendered itself for another day. We began our journey home with just a further quick pit-stop for ice cream for the younger travellers, notwithstanding it was now below freezing outside! Later on, safely home, unshod, night fallen and the fire taken hold we continued to relish in the glow of a day well spent, dipping into the ancient and majestic landscape of Sligo and North Leitrim. We have many similar day trips planned. You can check out what’s on offer in Leitrim at http://leitrimtourism.com/ and in neighbouring Sligo at http://www.sligotourism.ie/ . Go and find your “bee loud glade”, its out there somewhere waiting to be discovered.