I visited the Chinese Cemetery in Noyelles Sur Mer a few weeks ago. I really came across the place by accident. I had just visited the scene of the Battle of Crecy (1346) where King Edward III’s English army annihilated the French force under King Philip VI. I was returning to our lodging in St. Valery Sure-Mer when I saw a sign for the ‘Cimetière Chinois’. Even with my limited French I knew that this must be a war cemetery but presumed it was a cemetery for French Colonials from Indochina. Curiosity got the better of me and so I took a turn off in Noyelles. I soon found the cemetery down a quiet back lane surrounded by wheat fields. We were the only ones visiting. The first thing you notice is the beautiful Chinese archway which guards the entrance. The cemetery like all war cemeteries in France is well-kept, neat and tidy. The information plaque advises that there are 849 graves here and that they all belong to members of the Chinese Labour Corps. Most of the deaths seemed to have occurred in 1918 and 1919 and the majority of these after the Armistice. I immediately wondered had most succumbed to the Flu Epidemic or some other calamity.? Only some of the graves have the names of the deceased. Most just have numbers. Also each grave stone contains an epitaph and after some observation I worked out that there were only four options, “Faithful unto death (至死忠誠)”, “A good reputation endures forever (流芳百世)”, “A noble duty bravely done (勇往直前)” and “Though dead he still liveth (雖死猶生)”. The remains also seem to have been buried two per grave.

I decided to do a bit more research and discovered that the men came mostly from Shandong Province.  They were recruited and processed by both the French and English through the Treaty ports Tianjin and Weihaiwei. They were poor and from the countryside. The wages offered were very high by Chinese standards but low by European rates (about 1/3 of a French privates salary). The selection process weeded out those with disease and so only the strongest labourers were selected. The journey was arduous, almost three months by ship until they docked at Marseilles. When a German U-boat sank a ship drowning 540 Chinese labourers the route was changed. Now the labourers crossed the Pacific, were shipped in cattle trucks across Canada and then sailed the Atlantic. It must have been a terrifying experience for what were simple, rural peasants with little knowledge of the wider world.

In France they worked 10 hours a day and 7 days a week for 20 yuan. They worked building trenches, repairing railways, unloading and transporting supplies to the troops. The strange food caused many to suffer stomach problems. Camp conditions were hard and work conditions uncomfortable. When the war was over the men were not repatriated immediately but were used in mine clearance and recovering bodies from the battlefields. This was dangerous and foul work. It is estimated that up to 10,000 died during the War from shelling, landmines, poor treatment, cholera or the worldwide flu epidemic. It was estimated that at the end of the war over 300,000 workers from the Colonies, 100,000 Egyptians, 21,000 Indians and 20,000 native South Africans were working throughout France and the Middle East by 1918. After the war, the British government sent a War Medal to every member of the Chinese Labour Corps. The medal was exactly like the British War Medal that had issued to every member of the British armed forces, except that it was of bronze, not silver, a fact that illustrates the lesser value placed on these men upon whose backs and hands the war was won.

‘By the terms of this contract…I, the undersigned coolie recruited by the Weihaiwei Labour Bureau, declare myself to be a willing labourer’

The grave of Chang Tso Sheng

This is not your fatherland, where they make you toil,

Digging trenches for the damned, pulling bodies from the soil.

This is not your motherland, where you clear mines all day,

Did they tell you about the shells, the fever and decay.

You left your family in Shandong, you were shipped across the sea

Loaded on a cattle truck, and then dumped in Picardy.

Why did you join this fight Sheng? What brought you to this place?

What is the cause you died for? Was it two yuan per day?

Now you lie in Noyelles –sur- Mer, amongst the fields of wheat,

‘Faithful unto death’, it says, not the fate you’d planned to meet.

A medal then was cast, to remember this campaign,

They said it didn’t matter, the colour of your skin,

So your noble sacrifice was honoured,

your number was engraved,

But theirs was cast in silver

and yours in simple bronze. 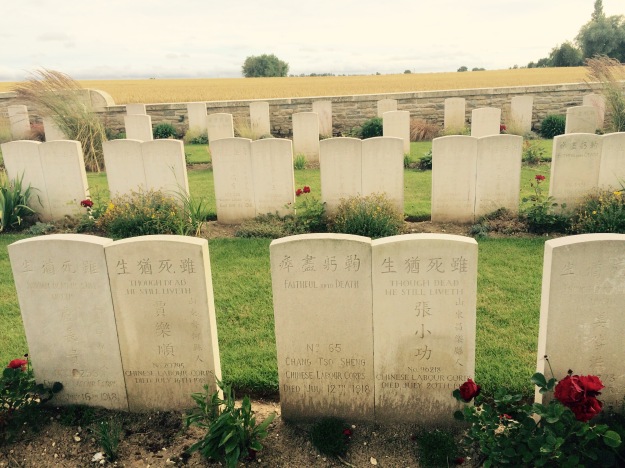 I’ll meet you by the Moose he said,

It’s a Caribou, I thought

As his friends walked on ahead

to survey the pot-holed earth

They fell in piles just over there,

past that small, neat track

Close by the shattered tree

In their brave reckless attack

Now ‘No mans land’ is a gentle green

where the New Foundlanders all fell

Dying for a far off King

In a half-hour hell it was over

From  an Island far away, and

where still they count the cost

They met up by the Caribou

looked again across the field,

They cursed the tragedy of man,

When his pride it cannot yield.