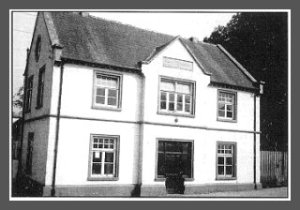 Mohill and Cloone became the national centre of the infamous Anti – Jazz campaign of the early 1930’s. The leader of the campaign was the parish priest of Cloone, Fr. Peter Conefrey.  Conefrey was an ardent cultural nationalist and was heavily involved in the promotion of Irish music, dancing and the Irish language.  He devoted his life to making parishioners wear home – spun clothes and become self – sufficient in food.

Many people who look at the anti-jazz campaign often do so in isolation of the cultural context and background in which these events played out. The new Irish State faced enormous economic and social problems including high unemployment rates and falling living standards. The hierarchy of the Catholic Church had grown considerably in power and influence after independence and began to pre-occupy itself with perceived threats to the virtue of it flock. In the Lenten pastorals of 1924 the Irish Bishops addressed mass-goers on a number of evils and sources of degradation; these threats included women’s fashions, immodest dress, indecent dancing, theatrical performances and cinema exhibitions, evil literature, drink, strikes and lock-outs. By 1931 Archbishop McRory had taken to attacking the dangers of increased mobility which was bringing people into more and more contact with various evil vices. Now even the humble bicycle was a conduit for moral danger whilst ‘the motor car was seen as an instrument of seduction in the hands of unscrupulous males’.

Of all the perceived threats to the moral health of the nation one rose high above all others, the unlicensed Dance Hall, The clergy were not against dancing in principle. It was a perfectly healthy activity so long as the dances were of Irish Origin and the supervision was close. Cardinal Logue stated

In 1931 a Government appointed committee investigated the moral condition of the Nation, and its subsequent report, known as the Carrigan Report, concluded that the moral sate of the nation was very poor and legislation would have to be passed to improve the situation.

‘The ‘commercialised’ dance halls, picture houses of sorts, and the opportunities afforded by the misuse of motor cars for luring girls, are the chief causes alleged for the present looseness of morals’.

The Clergy led the way in seeking to have unlicensed dance halls closed and foreign dances banned entirely and pressurised the Government at every juncture for legislative reform. The definition of a ‘Street’ in the Criminal Law Amendment Bill was extended to include the evil motor car leading the liberal Senator Dr. Mahaffy to suggest that a wheelbarrow was a street and therefore could be used for an immoral purpose!

The Gaelic League re-launched its anti-jazz campaign in 1934. Fr. Peter Conefrey, the parish priest of Cloone came to national prominence as one of the leaders of the Anti-Jazz Campaign. Before long the campaign had grown into a national frenzy with Mohill at the epicentre. To have an alternative opinion was to be considered ‘anti-Gaelic’ and ‘un-Irish’.

In January 1934 a large demonstration took place in Mohill, County Leitrim. It was made up mostly of young people and the press estimated the attendance at 3,000, with five bands and banners inscribed with ‘DOWN WITH JAZZ’ and ‘OUT WITH PAGANISM’. Support came from church and state. A meeting was then held at the Canon Donohoe Hall organised and chaired by Canon Masterson the local Parish Priest. A letter from Cardinal McRory was read out:

‘I heartily wish success to the Co. Leitrim executive of the Gaelic League in its campaign against all night jazz dancing. I know nothing about jazz dancing except that I understand that they are suggestive and demoralising: but jazz apart, all night dances are objectionable on many grounds and in country districts and small towns are a fruitful source of scandal and ruin, spiritual and temporal. To how many poor innocent young girls have they not been an occasion of irreparable disgrace and lifelong sorrow?’

The campaign was given official state blessing in a letter from Eamonn de Valera:

‘I sincerely hope that the efforts of Conradh na Gaeilge in your county to restore will be successful, and within the reasonable hours which have always been associated with Irish entertainment’.

Douglas Hyde also sent a message of support to the meeting and he hoped in future that all dances and games should be Irish. The Secretary of the Gaelic League Sean O’Ceallaigh condemned the Minister for Finance, Sean McEntee;

‘Our Minister of Finance has a soul buried in jazz and is selling the musical soul of the nation for the dividends of sponsored jazz programmes. He is jazzing every night of the week’.  A voice from the floor shouted, ‘Put him (MacEntee) out.’ To which Ó Ceallaigh replied, ‘Well I did not help to put him in,’ and added,

This prompted the local Fianna Fáil TD, Ben Maguire, to defend his party colleague.  He agreed that the broadcasting was not as national as it should be but he declared that if the minister was to be attacked personally he would take up the challenge on his behalf.  He added, ‘I hope it will not pass unanswered and that the minister will be given the opportunity of defending himself.’

Fr. Conefrey then got up to speak. He declared that jazz was a greater danger to the Irish people than drunkenness and landlordism and concerted action by church and state was required. Jazz, Fr. Conefrey advised the gathering, emanated from “the savages of Africa” and had been brought to Ireland by “the anti-God society, with the object of destroying morals and religion.” He called on the government to circularise Garda barracks to forbid the organisation of jazz dances and to compel dance halls to shut at 11 pm.  He also called for the training of young teachers in Irish music and dancing. The meeting in Mohill was the high point of the anti-jazz campaign and it was covered by all the major newspapers and further afield.

Fr. McCormack from Granard, Co. Longford, informed the meeting that GAA clubs were some of the worst offenders for organising jazz dances while Mr. B. Fay of the Ulster Council of the GAA called for legislation regulating the use of dance halls and excluding young people under the age of 16 from entering them.  He also warned that it was a sign of degradation to see young women smoking in public. Not surprisingly the meeting was then followed by a concert and Céilí in the hall.

On the 20th of January, the Leitrim Observer published a letter from ‘Lia Fáil and fellow Gaels.’  The writer advised the ‘Gaels of Breffini’ that,

‘we are with you in the fight against the imported slush. Keep out, we say the so – called music and songs of the Gall; his silly dances and filthy papers, too.  We can never be free until this is done’.

The piece went on to say,

‘Let the pagan Saxon be told that we Irish Catholics do not want and will not have the dances and the music that he has borrowed from the savages of the islands of the Pacific.  Let him keep them for the 30 million pagans he has at home.’

It was eventually decided that Dance Halls should be the subject of separate legislation. The Dance Halls Act of 1935 was passed without any debate in the Dail. The act was draconian and made it practically impossible to hold dances without the sanction of the trinity of clergy, police and judiciary. It marked the end of private dances in private homes which were popular up to that time. It also led to the closing of many privately owned Halls who could not compete with the many new Parish Halls that sprung up around the country. At last the Church and Conradh na Gaelige could rest content that one of its main proposals for legal control of personal morality had become the law of the land.

1 thought on “‘JAZZING EVERY NIGHT OF THE WEEK’”