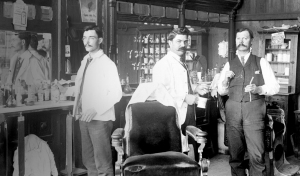 Shaving had never seemed routine to me as a boy. I believed that shaving was something ceremonial, almost ritual and more than mere necessity; it was a performance, the theatre of the everyday, the essence of life, a mark of manhood and flash of vigour. My father used a wooden handled foam brush to mix the cool shaving cream that he then daubed over his prickly face to soften the stubble. He then began by slowly dragging the sharp blade across his jaw, like mowing a meadow in straight swathes, before cleaning the blade under the cold tap after every second or third stroke, repeating the motion, cleansing, shearing and renewing. He would finish with the more difficult movements around the mouth and lips, which he pinched, in deep concentration, before finally washing the residual foam away with a wet cloth. A quick dab of cold water marked the end of the ceremony; all the time unaware that I was standing there watching, learning, in awe.

No doubt he too would have looked at his father, my Grandfather, shaving, or perhaps his uncles when they came home from England in the summer. Once I had tried to mimic the act of shaving with my father’s razor, a foolish act borne out of my impatience to become a man, and testified by the cross-like scar on my upper lip. The scar is hidden now by my own stubble only to appear anew when I shave. My Grandfather had berated me for my stupidity, a silly boy trying to be a man.  But still I copied him, like in McKee’s Bar on the nights of the big sales in the local Mart, the pub full of jobbers, tanglers, dealers, Northern buyers, tobacco smoke and thick ash plants for beating cattle up trailer ramps. I would hang at my Grandfather’s side, sitting on the high stool, aping his gestures and movements, my legs dangling, swinging in time to the beat and blare of the mixed accents of men from Cavan, Longford, Roscommon and Fermanagh. There flowed the sounds of  laughter, merriment, rows, insults and the vigorous shaking of hands, the entire drama that went on such nights as I pretended my frothy Cavan Cola was a glass of Guinness.

Later I would link my Grandfather home from town, standing well in on the grassy verge when car lights approached, until we came as far as our own lane.  On the way home he would denounce what ‘they’ had done to men like Blessed Oliver Plunkett, He would tell me how Parnell was let down badly but had let himself down too. He would get most animated when he spoke of about his own Great-Grandfather, ‘don’t ever forget’ he said that ‘they were burnt out of their house, put to the road and they after hanging him from the shafts of a cart.’  It may have been in 1798 but the message was we ‘Don’t ever forget’. Unbeknownst I had now been passed an invisible torch, whether I wanted to hold it or not. Then as we approached the house he would straighten up, puff out his chest, fortified for meeting my Grandmother.

In summer time my Grandfather had often shaved on the back street of the house, a red basin with warm water set on a chair brought out from the kitchen, a fresh towel laid across the high back, a small mirror propped up on the wall with a red brick. A brown faced Collie lay stretched, watching him, panting in the heat of the mid-morning sun. I would sit there watching him too. With his braces now hanging down by his sides, he looked like a character from a Western; standing there he could have been out on the high plains, so engrossed was he in his labour. When finished he bent down scooping up the water in his cupped hands, washing away the last of the foam from his now shiny skin. He then patted his face dry with the towel, which was then thrown over his shoulder, before he picked up the basin, flinging its contents down the yard, scattering cats and hens in all directions. He was gone then into the house, his ablutions over. When he emerged he was wearing his bright sports coat and a gaudy wide tie, the latter clearly from another decade, another continent even. He patted me first and then the dog and muttered something about looking like a ‘broken down gentleman’ then he was gone for the day to a meeting.

In time he became a frail man, his body shaking with uncontrollable tremors that mocked him and broke his spirit. His daughters now took turns in shaving him. His shaking hand would only have done himself harm. Instead of a sharp razor blade they preferred to use a red and black Remington electric Razor. It was a present they had bought for him one recent Christmas. It was very sleek and modern with a tilting head to match the contours of his rugged, well lined country face. I thought that one day I would like to own a smart looking Remington too.

Four weeks after he died and I am sitting in the room where he once sat, in the chair that he would have sat in. I look around the room at the people gathered for his Months Mind mass. Trays of sandwiches are passed around followed by plates laden with slices of fruit flan and apple tart, the latter flavoured  with cloves of course, my grandmothers way. My Aunts fly about with pots of freshly brewed tea topping up delicate china cups, in a room where an epic turf fire blazes. On a shelf above the radio, a small statue of St. Martin de Porres acts as a paperweight for numerous Mass Cards, itself surrounded by various miraculous medals and several bottle of holy water, from Knock, Fatima and Lourdes. There too are his reading glasses, the ones he detested and fumed about constantly. On the inside sits a shiny box containing his electric razor. An hour later as we are all leaving I ask my Grandmother if I can have his razor. ‘Of course’ she says, ‘of course, why wouldn’t you, …… we’ve no use for it now’.

A few days later I plug the razor into the two pronged socket in the bathroom and begin my first ever dry shave. The shaver buzzes for a few minutes but after only completing one jaw it struggles and chokes. I flip open the lid and tap it firmly against the side of the wash hand basin tipping the contents out. The slow running water from the cold tap gathers up the discarded stubble, the water turning first grey, then dark and mottled, making ever increasing concentric circles. I stand suspended, looking down in the basin where my own fresh stubble is now mixed with the last my grandfather ever grew. I remembered now, I remembered the women below in the corpse room preparing his body for the wake, and our cousin coming up the hall with the Remington box in her hand. It was she who placed the box on the shelf.  I gaze in the mirror at my half shaven face. I look deep into my now glossy eyes, completely overcome with the significance of the stubble, slowly emptying, down the plughole, of eternity.

1 thought on “The Art of Shaving”