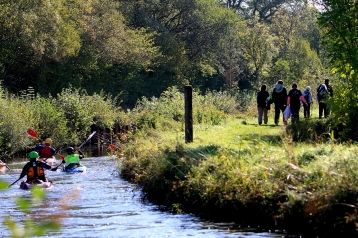 A few years ago many of us would not have known what terms like Glamping or Supping meant. The cousin, JP, thought Glamping was a nocturnal activity himself and Eddie Joe did at the weekends with a large spotlight attached to the bullbars of his jeep, scanning the bogs for Foxes.  So you can imagine my surprise when JP announced recently that he and ‘the woman’ were SUPping over in Drumshanbo at the weekend. Being old school I thought supping was something JP did whilst shouting at a TV screen in the local whilst elucidating on the performances of his ‘beloved’ Everton. For JP, until now that is, a good sup, usually consisted of 8-10 pints of Smithwicks. This time though JP wasn’t having me on, he had just spent a few leisurely hours paddling down a canal in what is now known as Leitrim’s Blueway.

The Shannon Blueway is in fact the first of its kind in Ireland, an inland series of  water and land based trails. It facilitates paddling from Drumshanbo to Carrick-on Shannon via Battlebridge and Leitrim Village. JP isn’t the only one raving about it, numerous Travel Writers and journalists are focussing in on places like Leitrim and initiatives like the Blueway. In the coming years we will likely see the development of a number of Greenways in the County. One of these planned Greenways will traverse North Leitrim from Dromahaire to Glenfarne on the route of the old Sligo-Leitrim and Northern Railway. Another Rail Trail is planned for South Leitrim running from Mohill to Belturbet in Cavan along the former route of the Cavan-Leitrim narrow gauge railway. All of these projects are wonderful and all hope to emulate the success of the Greenway in Mayo.

I decided to investigate at the weekend and although it was damp and cold I was well wrapped up by the time I got out of the Jeep at ‘Beirnes of Battlebridge’. Set on the banks of the River Shannon, there is a charming caravan and camping park her, set in natural sylvan surroundings. The Pub at Battlebridge has being in the Beirne family for generations. The place was one of Ireland’s best kept secrets until the charming rural retreat was the proud recipient of several awards, including: Black & White Pub award and Irish Pub of Distinction. In 2014 Beirnes was nominated by “The Irish Restaurants Association” for “The best gastro pub award”. The Caravan and Camping Park has standard pitches as well as the opportunity for some Glamping and has been listed as one of the “10 best Irish camp-sites” by the Irish Independent. You can even do a bit of paint ball shooting here.

Battlebridge has in fact two bridges, one crosses the Canal and the other the Shannon itself. The Canal was built as to assist navigation south of Drumshanbo and I head for a walk that starts between the Canal and the river. The walk is a loop walk to Drumhauver. It is a pleasant walk and like all canal-side trails is easy going due to the level ground. The sun is starting to dip in the west and I can see the Shannon to my left and its flat ‘calloughs’ fields and plenty of ‘pools among the rushes’ as Yeats wrote. The halfway point is a set of locks at Drumaleague. Here the frost laden crest of Sliabh an Iarainn comes into view, it’s white crown unseasonal but not unprecedented.  The turning point in my walk is Drumhauver Bridge and I take a break after walking for an hour at this stage.  I have met a score of people walking on the canal bank both visitors and locals I surmise. The lack of fitness begins to tell on the southern return leg. At Drumaleague I am like a marathon runner who has hit the infamous wall. I curse my over-confidence but struggle on, get a second wind, and in the fading light I reach Battlebridge again. I reward myself with the wonderful restorative properties of a pint of plain in Beirnes. Whilst I didn’t meet any SUPpers enroute I can appreciate that a paddle down the canal from Drumshanbo to Carrick-on-Shannon is on my to-do list for when the long evenings ahead. There are certainly many more activities such as trails and walks in Leitrim these days as we strive to attract those interested in activity based holidays. Great credit is due to the Leitrim Development Company, Leitrim Tourism and funds such as Leader and the Rural Development Programme (RDP) which have provided practical advice and financial resources to people interested in developing tourism focussed projects.

Recently, Pol O’Conghaile, the Travel Writer wrote a heart-warming article in  the Irish independent setting out Ten Great Reasons to visit Leitrim. Pol opened with “It’s small, off-radar and home to just 32,000 souls. But Leitrim packs a serious punch… and lots of surprises for the visitor” and went on to list the County’s Literary connections, its natural beauty spots, adventure breaks, award winning restaurants and describes the place as an ‘adventure Eden’ and ‘walkers paradise’. The article went mini-viral and was shared, mostly by Leitrim residents and ex-pats, although few in number, we Leitrim folk are very proud of our little corner of God’s creation. The article had the capacity to instil a pride in a person’s home place in the way that a parent feels  all gooey inside when their young daughter wins first prize at the local feis. I was no different, anybody who reads this blog will quickly realise that for me Leitrim is one of the loves of my life. Hopefully such articles will be read by more than just sentimental Leitrimites around the world. Come visit we’re open.