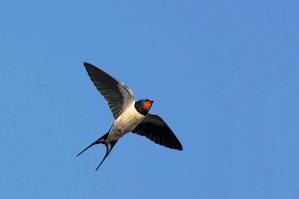 The annual arrival of the Swallow is one of the surest signs that Summer is on its way. We have had them since the beginning of April. The first weeks are spent securing their nests, building new ones and repairing old ones. You can find them anywhere but they seem to like farmyards and their byres, haysheds and barns. We have two permanent nests on our dwelling house, the oldest of which is here at least ten years now. I have managed to affix some plain corrie board from an old  poster directly underneath the nests to catch the droppings. The swallows might be cute but they have little respect for a freshly painted or whitewashed wall. One of our nests is high up under the eave on the Western Gable of the house whilst the other is squeezed in between an eave and a drainpipe. I’m reminded of the  The Wind in the Willows, where the swallows discuss with relish their impending return to “the house of the perfect eaves”. Not only are these tiny birds amazing flyers but they are great architects and precision builders too.

By now the birds are paired off, well settled in, with eggs laid and soon to hatch. The swallow practices love in a cold climate. The male and female will build the nest together. The long evenings are now spent darting and diving in the acrobatic pursuit of insects. It was the swallow after all who first invented the concept of in-flight dining. They say that the swallow is so adept that they can even swoop low along a watercourse and drink water without stopping. The skill and athleticism of these little birds are a sight to behold in the dying hours of the day. They are also very brave little birds and will swoop low like an F16 fighter pilot on any man or beast getting too close to the nest. I have vivid memories of the swallows teasing an old sheepdog we had at home, dive bombing him and turning him around in circles in the farm yard, in what for them must have been a source of endless amusement and mischief. The rest of their summer will now be spent rearing the insatiable chicks.

I always find it amazing to think that these little birds will next year return to this same place, the place of their birth and in some ways I feel honoured..

Billy Flynn, an ecologist for the Irish Wildlife Trust said , “Swallows travel in families, with the younger birds following their parents when they migrate for the cold months. What is incredible about them, Flynn explained, is that young swallows are still able to make the journey themselves, even if their parents have died or got lost before they had a chance to show them.

No one is exactly sure how they manage this but it is thought instinct plays a big part, as well as magnetism. Most animals have the mineral magnetite in their skulls and this gives birds a kind of internal compass. It’s an amazing journey, they pass over deserts, seas, they fly through all sorts of weather and when you see the tiny size of them, you can fit two in the palm of your hand.”[i]

The swallow doesn’t seem to do retirement and is constantly on the move, He simply cannot sit still, a consummate workaholic. As if inventing in flight dining wasn’t enough he also promoted the classic long distance commute. As much as I look forward to them coming I hate to see them going; their departure signals the end of the summer. If they are gone before the Hurling final you can watch out for a bleak winter, if they linger on until October then it mightn’t be too bad. In the months following this I will curse again the price of oil, whilst Comrade Swallow has retired five thousand miles to the south, to his dacha in sub-Saharan Africa. Observers say the numbers of swallows are depleting and I sincerely hope that this can be reversed. It will be a very sad day if ever the swallow does not return.