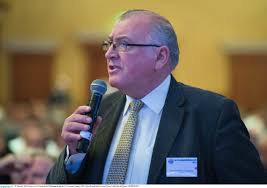 All-Ireland victory speeches tend to follow a template for some reason. The “Tá an athas orm an Corn seo a Bhua” followed by three “Hip Hip Hurrahs” for the losing team. It’s an archaic, regimental and pretty boring climax to a summer of action.

This is why the 1980 victory speech in the aftermath of Galway’s win in the All-Ireland Hurling final is so memorable. For a start it was a special day for the Tribesmen as they finally got their hands on the Liam  McCarthy Cup after a lengthy absence (one previous win in 1923). The speech is most memorable because of the beautiful blás of Joe Connolly’s Irish followed by his witty homage to Pope John Paul II “Young People of Ireland” speech from the previous year in Ballybrit Racecourse.

But the abiding memory of those glorious few minutes up those golden steps of the Hogan Stand is when Joe McDonagh sang his customised version of “The Wests Awake” to the ecstatic crowd.  It is a beautiful moment that continues to resonate in the hearts of all people from the West of Ireland, not just Galway. It is a moment that has a rawness, a purity of emotion.

There will be long obituaries written about Joe McDonagh elsewhere – he achieved a lot in life, in sport as a player and official, as an educator and a family man. For many like me, people who never even met him in person, he shall remain the man who took up a microphone and sang to a stadium and to Irish people ‘away o’er the water, away o’er the foam’. It is estimated that a crowd of 8,000 was in Gaelic Park in the Bronx watching and listening, not to mention the thousands gathered around radios all over the the world.

In his impromptu performance McDonagh proclaimed that the people of the West, the people who faced the most adversity and the highest emigration, were as good as the rest and even better.

Rest in Peace Joe McDonagh, the man who awoke the passion in his people, sending them back to their homes and into workplaces, their chests puffed out with pride, shoulders back and a purpose to their gait.