Some words in their ordinary meaning may describe something distasteful but are unlikely to cause offence to the general populace. The same words uttered in Ireland can be transformed and give rise to grave offence and public outrage. These words might even stir people to commit violent deeds. This is not to say that we Irish are thin skinned, though on balance we probably are, but rather that certain words remind us of sad, bad and shameful events.

These words uttered in Ireland may cause some to raise fists or whatever else they can find close by. Others they simply repair to the Law Library to hire the best defamation lawyer they can afford, demanding vindication of their good name. This is exactly what happened in the early 1970’s when a man called Peter Berry, a high-ranking civil servant took on the Irish Times. The plaintiff claimed that he had been defamed when the defendants published a photograph of a person at a protest carrying a sign with allegedly defamatory material printed on it.

Mr. Berry did not succeed in his claim but the dissenting views of some of the Supreme Court members are interesting. Fitzgerald J said that:

It would appear if you don’t want to annoy an Irishman please refrain from calling him a Felon setter. Nor should you ever call him a “Gombeen Man” for it was this slight that led former Taoiseach Albert Reynolds to take on the Sunday Times for an article which was effectively his political obituary. For “Gombeen” is a pejorative term that hints at a shady, unscrupolous dealer who hoarded food during famine times until the price would rise and profits would flow.

In a country where Land Reform is just over a century old the word Eviction is still emotive. The recent goings on a farm outside Strokestown, County Roscommon have highlighted the fact that this word is still capable of stirring up the wildest of emotions in people. It also suggests that some people in KBC Bank ought to undertake a little cultural awareness training – at least intensive instruction for the bright spark who decided to hire a few gentlemen from the northern part of this Island, instructing them to travel to a farm in the rural west of Ireland for the purpose of forcefully removing (even if they argue the force used was reasonable) the legal owners of that property.

‘to withdraw from commercial or social relations with (a country, organization, or person) as a punishment or protest’. In 1880 Captain Boycott had to avail of the services of up to fifty Orangemen from Cavan and Monaghan to save the harvest on Lord Ernes Estate. They were escorted to and from Claremorris by over one thousand policemen and soldiers.

In 2018 KBC in their wisdom hired a security firm from Northern Ireland to re-possess / evict the owners from a farm in Roscommon. Maybe it is true that History teaches us nothing, save that we are doomed to make the same mistakes as before. One incident from some amateur footage taken at the scene records the underlying tensions. The cameraman suggests to one of the security men that he should be ashamed to call yourself an Irish man. The security man, in a thick northern brogue, tells his accuser that he is not Irish, I’m British. The Ulster Plantation, the gift that keeps on giving, it is enough to break the Internet.

The whole sequence of events also highlights the gulf between mainstream media and social media. In some newspapers the event is called a “re-possession” which is legally the correct term. On most social media sites it is referred to as an ‘eviction’ and therein lies the problem. Re-possession begs one to explore the background to how this situation was arrived at. Eviction on the other hand needs no such reflection, eviction is always bad, eviction pushes different buttons altogether in the Irish psyche.

The exchanges in the Dail after the eviction / re-possession was fiery. Pearse Doherty TD said that what happened when the family was evicted was a “disgrace. It was unjustified and it brought to mind the scenes of our past where families were being evicted and thrown onto the side of the road.”

“It was an ordeal of thuggery from a group of men acting on behalf of a financial institution with the Gardaí watching on.”

The Taoiseach focus is in the ‘vigilantes’ and the risk to the peace of the State.

It really could have been Mayo in 1880, the Orange men under the guard of the Royal Irish Constabulary, mass evictions nearby. It lays the blame firmly at the feet of the bank and the State for not acting. Some online commentators allege state collusion but never is any evidence produced to back this up. The Gardai come in for a lot of blame but what is their function in what is a civil matter. Online forums are full of mis-information, false assumptions and ignorance of the law. But let’s not that get in the way of the various posters narrative building, they’ll just shout you down anyway.

The print media generally focussed more on the people who attacked the security firm. The narrative shifts depending on what viewpoint you wish to articulate. The Irish Independent describes those who attacked the security firm as “dissidents”, “Vigilantes” “republican elements” who “exploited the anger”. The reports focus on the baseball bats, chainsaws, burnt out vehicles. You can’t be left without thinking that this was a well organised and executed punishment beating. Meanwhile online the perpetrators are hailed as “patriots”. Are they the modern incarnate of the land-leaguers that Davitt inspired? Or are they bigger thugs than the previous thugs. 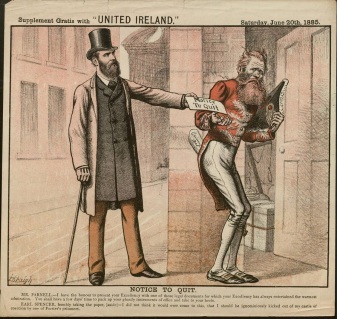 Parnell asked a meeting in Ennis in 1880 what they would do to to a Tenant that bid for his evicted neighbour’s farm. The crowd replied in unison “shoot him, shoot him”. Parnell replied that there was a much better way “you must show him by leaving him severely alone, by putting him in a moral Coventry, your detestation for his crime”

By getting the crowd to illicit the extremist response Parnell then counselled the crowd on a moderate but more effective strategy.

The security firm that attended the property can hardly be said to be politically motivated. Most are simply there for the cash. In order to demonise them they must be labelled, they must become ‘loyalist thugs’ ‘ex UVF’, Ex UDR’, ‘Former British Soldiers’ and thereby ‘Scum’.

The Re-possession must be portrayed as an Eviction in the same manner as Victorian Ireland evictions. KBC must assumes the role of cruel, tyrannical landlord. The Gardai (now headed by Drew Harris) are the RIC and are all in on it and are not there to protect the citizens. Its all one big conspiracy.

Nowhere in this particular narrative does one look at the chronology of events that lead up to the fateful moment these shady persons pulled up outside the farmhouse in Strokestown. Examining the dealings and behaviour of the borrower over the last decade or more also does not form part of the narrative – victimhood is simply assumed. Could it be that therein lies  some inconvenient truths. Would it assist a reasonable person in having information to hand such as; What was the original loan for? What were the funds used for? How many repayments were made? How much arrears were built up? What engagement had the borrower with the bank? When did Court proceedings issue? Did the borrower engage a Solicitor to act on his behalf? Did the borrower engage with the Courts? Did he engage with a Personal Insolvency Advisor? What efforts were made to make some payment? These matters are normally private but because of what has happened they are now very much in the public interest.

This information is crucial to understanding what has really happened at Strokestown. Colm Keena in the Times makes an attempt to give people some information about the financial health of the landowner. We know that Mr. McGann had a major tax settlement arising from an under-declaration as well as a number of Judgements registered, some involving local businesses. Again this is very factual and short on context but it does paint a picture of a man who cannot or possibly does not pay bills or repay loans.  An article by Keena today suggests that KBC have been seeking repayment for at least nine years now past. These are not irrelevant matters.

When a person takes out mortgage they are always advised that default of payment can lead to you losing your home. Sure we might not think it will ever come to that.  Many of us also think the doctor will never give us bad news about our health. It happens every day. The reality is we all must borrow money at some stage in our lives and we all must repay that money plus the interest. Similarly, we must pay our taxes even if we grumble about them. It might therefore be appropriate to also pose questions such as; What if we all stopped paying our taxes? What if we all stopped paying our mortgages?

We should also look at the answers; If we don’t pay our taxes we risk being audited by Revenue and been subjected to not just paying the original tax owed but also penalties and surcharges. Without this deterrent the State would not function. A Mortgage is a Contract and if we fail to meet our repayments we are in breach of that contract. The causes of the breach can then be looked but no matter what the cause, be it unemployment, illness, economic downturn etc the mortgage contract has been breached. The Courts in Ireland make the distinction between those who can’t pay and those who refuse to pay. The Family Home is also treated differently. It is convenient to attack the organs of state and financial institutions but we must never blindly absolve individuals of personal responsibility and obligations.

The truth behind this Strokestown Eviction / Re-possession is very well camoflauged and as such suits the many different narratives that have jumped on the bandwagon. On the one hand the security firm are ‘loyalist thugs’ and ‘Henchmen’ of the cruel Bank, on the other they could be just men in need of a few quid coming up to Christmas and doing a really crap job. Their attackers may be patriotic heroes, rural robin hoods or alternatively as the Independent tried to paint them ‘linked to dissidents’ and a well known criminal gang. The landowner maybe a victim of corporate greed, a citizen let down by the state, a foolish man who bit off more than he could chew, or a serial defaulter in his financial dealings. Wherein lies the truth?

This last week we have seen what can happen when imprudent lending and imprudent borrowing marry and what can quickly inhabit the vacuum that lies between. Never were the words of the wise Polonius more appropriate – ‘Neither a borrower nor a Lender be’.