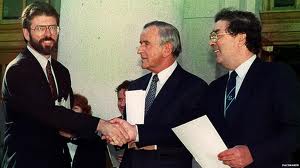 Life, like Literature has a habit of juxtaposing seemingly odd ends together. Milton gives us God and Satan in ‘Paradise Lost’ and for some reason the fallen Angel came out of it with an enhanced reputation. This morning I read that a small train station called Dromod, the only train station in all of County Leitrim, was in danger of closing. I have used the Station on many occasions often not knowing when I’d be back.

Many of my forbears also used Dromod Station. Sadly some never saw their native County again. The train meandered behind our home place. It was said that in the late 19th Century my Great-Great -Grandfather climbed a rick of hay so that he could wave goodbye to his New York bound granddaughter on the passing locomotive. Climbing a rick of hay is not exactly alpine in scale until you factor in that the old man was reputedly a hundred years of age at the time. When I was younger I thought this story was nonsensical.  Years later I discovered the date of the grand daughter’s entry into Ellis Island. I slowly wiped the egg from my face.

Another relative of ours who never again saw home boarded the train in Dromod in late 1939. He went to England to work in a munitions factory. He died in Toronto in the 70’s. Word got back to the family who of course were shocked. The shock was not so much that the man had died but on where he had died. His sisters always believed that he was still living somewhere in Manchester. Thankfully, and unlike these family members, every time I took the train I did get to see home again. I know however that one day I’ll leave and that it will be the last time.

I remember also going out to Dromod to see the men from the Hills of Donegal bring back the spoils of war from Croke Park in ’92. That was a great sight and a wonderful occasion for the whole Northwest.

I have many memories of Dromod Station. Sadly a man passed away today that has no memory of Dromod. One time he knew everyone in the Village and everyone who bought a train ticket. Sadly Alzheimers ravaged this sharp mind and confused those precious recollections. I’m sure if he was in good health Albert Reynolds would not overly-nostalgic and perhaps say that it was the best of times, but also the worst of times.

Albert Reynolds main legacy will undoubtedly be the crucial role he played in bringing peace to this island. That is a noble legacy to what was an intractable problem. Albert may not have ticked all the boxes for the South County Dublin set but he was shrewd man, a person who took risks, who speculated to accumulate, a type of character no longer prowling the halls of Leinster House. Yes, Albert made mistakes, plenty of them and his political demise was full of controversy, yet somehow it is easy to forgive him. It is not simply because us Irish are wont to speak ill of the dead, it’s because Reynolds retained a common touch. He was a man who knew the value in the handshake to the country folk. My mother and father met in the ‘Cloudland’ in Rooskey, just like thousands of couples throughout the Midlands and West who found a partner in one of the many Reynolds Dance Halls in the hucklebuck era.

The Reynolds were said to be ruthless in business, especially with competitors and yet there are plenty of stories citing kind works Albert did for people without any fuss or fanfare.  His passing will be keenly felt in Longford which is suffering badly in the current recession. His home village of Rooskey is also in decline. Where once there was a booming meat processing plant employing hundreds of people from South Leitrim, North Roscommon and Longford there is now a quiet sleepy village where Bus Eireann only stops once a day.

As a young man Albert Reynolds worked as a clerk for CIE in Dromod Railway Station and I’m sure he carried many memories of the place with him throughout his life. I once met a man at a function in the North of England. He told me that when he was emigrating to England he had his boat fare but was short some money for the train fare. Albert let him on the train with a valid ticket and told him he’d see him when he was home again. The man found work but was not home for over two years. When he passed through Dromod Albert was no longer working there. The young emigre could have got away without repaying the fare but he felt he could not renege on the good deed. He made himself known to the Station Master who told him, ‘Ah yes, I remember young Reynolds saying you were from good stock and you’d be back’. The honest traveller told me he had the pleasure of telling Albert the story years later when he met him in Longford.  Reynolds knew immediately who he was and how much he had owed CIE, before saying to him ‘I never doubted ya’. 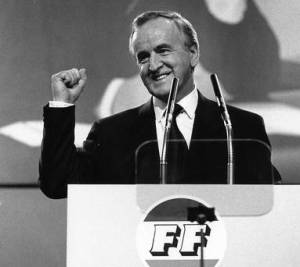 Politics has changed and so has Ireland since the Reynolds/Haughey/ MacSharry heydays. It is doubtful that we will ever see another Albertus Magnus. Eugene McGee reckoned the night he was made Taoiseach and returned to the Market Square in Longford was like the County winning the All-Ireland.

It is sad that the news regarding the future of Dromod Station is juxtaposed with the departure of its most famous employee. Sadly this time it’s a one way ticket for Albert. His loss will be keenly felt throughout the villages, towns and parish halls of Longford, Leitrim & Roscommon.