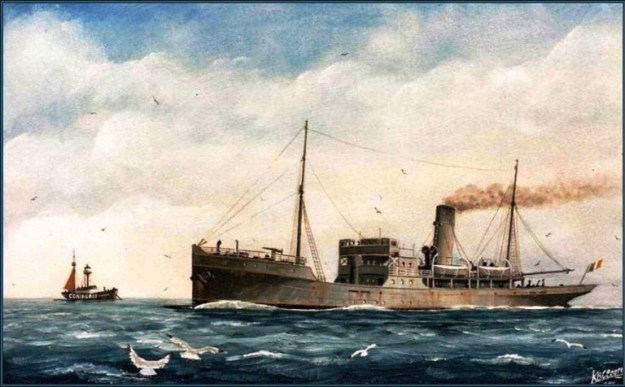 On Wednesday morning of Easter Rising week the British began in earnest the counter-attack to retake the City of Dublin. Artillery was brought up from Athlone and the gunship the ‘Helga’ was brought up the Liffey from its moorings in nearby Kingstown. Not long after the ‘Helga’ anchored in the Liffey at dawn, it began to target the buildings controlled by the rebels using artillery and incendiary shells to devastating effect. The gunship initially took up a position near the Custom House. De Valera seems to have obtained a brief relief from the barrage by hoisting a tricolour atop an empty distillery adjacent the Boland’s Mills and fooling the gunners as to the location of his garrison.

Over the coming days the ‘Helga’ assisted by additional field artillery firing from the Prussia Street and Phibsboro areas pummelled the city centre. Liberty Hall was quickly destroyed. Ironically the gunners had to take great care in firing as with the low elevation of the building and the location of the Railway bridge (Tara Street bridge) if the shells missed they would have travelled as far as the Phoenix Park. It is said that this actually happened with some shells landing near the Vicregal lodge and forcing the Helga to relocate further up the quays.

Soon the GPO and many buildings in Sackville Street and nearby were in flames. The remaining days of the rebellion would be a cauldron of smoke, flame and cordite for the rebels. Once the Helga began steaming up the Liffey the end was in sight for the Easter Rising in central Dublin. Soon they would have to abandon their posts and eventually surrender. It seems the rebels thought that the British would not destroy the economic heart of the second city of the Empire. In this they were very much mistaken. The majority of the action in the Rising, with some notable exceptions, was defined by sniper fire and artillery shells, rather than hand to hand fighting. The tragic result was more civilian casualties than combatants.

It was ironic then that a gunboat built in the City of Dublin and designed for the protection of Irish coastal waters would inflict so much damage on her home city.

The Helga ll was built in Liffey Dockyard in 1908 and its principal function lay as a fishery protection yacht under a wing of the Department of Agriculture. With the onset of the Great War she was taken over by the Admiralty converted to an armed steam yacht and became known as  “H.M.Y. Helga”. She patrolled the Irish Sea looking for enemy submarines.

In April 1918 The Helga was credited with the sinking of a submarine off the Isle of Man.

In October 1918 she was one of the first ships to the scene of the sinking RMS Leinster off the Kish Light. The Helga managed to save over 90 passengers but in total 600 people lost their lives that night. She was later used to transport troops in the War of Independence and reputedly the infamous Black and Tans. This was at a time when large troop movements were not possible due to risk of ambush or mines.

After the Truce the “Helga” was handed over to the Irish Free State and was renamed “Muirchu” or Sea Hound. She resumed her life as a fishery patrol vessel before seeing service again during the ‘Emergency’ as the Second World War is known as in Ireland.  In 1947 the “Muirchu” was sold to Hammond Lane Foundry for scrap. It seems the ship didn’t agree with her fate and while on her final passage on the 8th May, 1947 she sank off the Saltee Islands but without loss of life.It is also ironic that as she sank beneath the waves she bore the flag she had tried to destroy.