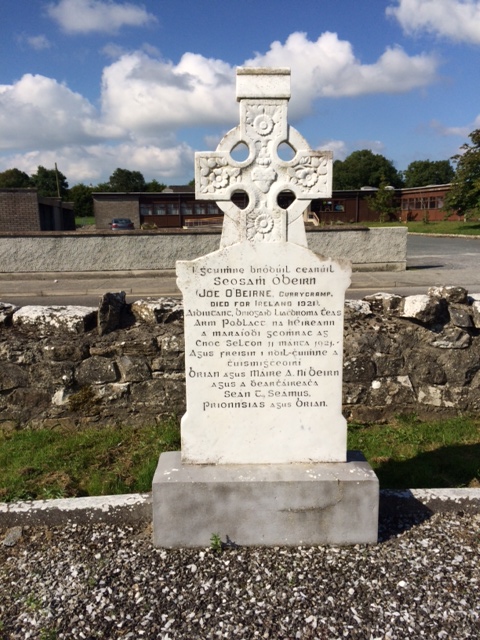 Sunday was a beautiful late summer day and I was back visiting the home turf. Noon found me showing my eldest boy my old Secondary School. The old Alma Mater is now looking very dingy and dilapidated.  The fact that it is overshadowed by the ultra-Modern, uber-cool Community School that replaced it a few years ago probably doesn’t help. Across the road from the dirty Old and the pristine New school is the parish graveyard. I recall one time long ago, when a group of us as teenagers, planned to use an Ouija Board on top of a ‘haunted’ grave here. We never did play the infamous board game there. I think secretly everyone was glad the idea just slowly died away and despite our external bravado, inside we were petrified of what might happen. It illustrated that deep down there is a primal fear of the unknown in us all. Graveyards no longer hold such fear for me. Some final resting places are very peaceful places to spend time in. Glasnevin cemetery is one of Dublin’s premier sightseeing locations and gives one a fantastic tour through Irish History. I have also enjoyed Woodlawn Cemetery in the Bronx where one can easily spend hours walking amid the beautiful manicured parkland-like graveyard. Mohill graveyard is not on the same scale obviously but it has its own little narratives waiting to be discovered. I decided to bring my son for a walk around the graveyard to show him the resting places of his relatives. Soon I was standing amid the old graves beside the seat of learning where I first read Thomas Gray’s famous lines,

‘beneath those rugged elms, that yew-tree’s shade,

Where heaves the turf in many a mouldering heap,

Each in his narrow cell for ever laid’

Soon we were reading the names of my sons Great-Great-Great Grandparents. I’m not sure the Eight year old mind can appreciate the generations that have gone before or the fact that without their existence, we wouldn’t exist. I know that he now knows where his people lie and that is good. I’m sure he will come back some day on his own initiative, and hopefully with the next generation too. We said a little prayer together for these people whom we never met but who gave us their DNA.

I also came across the grave of Joseph O’Beirne, an IRA Volunteer killed at Selton Hill in the spring of 1921. Selton Hill is about 5 miles north of Mohill on the road to Fenagh and Ballinamore. I had often heard about the ambush as a young boy from my grandmother who was born just a few townlands away. The general consensus was that the flying column of which O’Beirne was a member were betrayed by loose talk which passed to the local GP, Dr. Charles Pentland. The doctor was a popular man locally but he was also loyal to the Crown. He passed the information on to Inspector Gore-Hickman of the RIC and very quickly a British Army Unit was mobilised. The eleven volunteers in Flynn’s house at Selton had no idea that their fate was sealed. Some sat around drinking tea whilst cleaning their guns and others rested up, tired after an early morning march cross country. When they realised that they were found out it was too late. The main body of nine men who were in Flynn’s house spread out across the marshy bottoms. Quickly they were mowed down by two well-placed Lewis machine guns set up on the high ground on the main road above the house. The column was also undone by a small group of British Soldiers who had outflanked them and set up an enfilading position. Been fired at from two sides in mostly open country the veteran troops of the Bedfordshire Regiment had created a killing zone. In a few minutes six of the nine men who were in Flynn’s house were fatally wounded. Two more were badly wounded but survived. Only one, Andy McPartland escaped the bloody scene. Another man, Bernie Sweeney lay undetected in a drain where the cold water must have helped to stop the haemorrhage of blood from his wounds. The two men who were the luckiest of all were Pee McDermott and Paddy Guckian who were posted to a neighbouring house. They escaped around by Selton Lough. Joe O’Beirne hailed from Currycramp in Bornacoola but his family had a plot on Mohill graveyard. One of his sisters later married Ben McGuire who for many years was a Fianna Fail TD for Leitrim until he fell out with De Valera. McGuire and his wife Josephine (nee O’Beirne) are buried beside Joe whose beautiful gravestone proclaims  that he ‘died for Ireland’. Only a few yards away lay three graves close beside each other of men who may also have thought that they were dying for Ireland. These men though died in the First World War wearing the khaki green of the British Army. The first is Joe Salmon who was in the Army Services Corp and died in Belfast; the other two are brothers, the Reynolds from Treanmore. These are the only war graves identified in Mohill cemetery and in many ways they are unique in that they are only three of perhaps up to fifty Great War casualties  who are interred in their native parish. In the Great War the slaughter was so rapid that you were buried where you fell. Some who didn’t make it home are interred quite a distance away. Private John Cunion was from the Green Road where he was the eldest of the seven children of Bernard and Bridget. Bernard worked as a baker in town. John before signing on was an apprentice coach-maker. Today John lies thousands of miles away from his native Mohill. His grave is in a dusty town called Amarah on the bank of the Tigris in Iraq. In 2003 Amarah became a centre of resistance against the US led invasion. Just like in 1915 it was the British who fought their way into the city and took control block by block, street by street. The current instability in Iraq means that the Commonwealth War Graves Commission is finding it difficult to maintain the graveyard in Amarah. 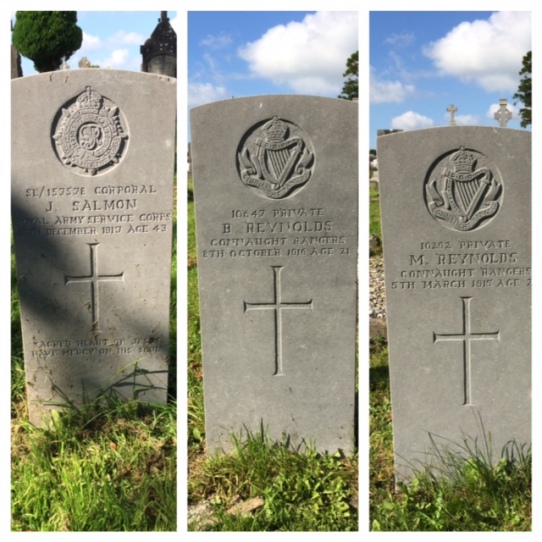 There are men from Mohill lying in Commonwealth Graves all over the World. Thomas Bell is buried in Allahabad in northern India. Francis Canning fell at Gallipoli. John Fitzgerald survived Gallipoli before his unit was later overrun by the Bulgarians at the Battle of Kosturino in modern day Macedonia. John’s remains were never found. and his death is simply recorded on a communal plaque.  John’s brother Patrick had already died in the opening months of the War. Another brother Thomas would die just three weeks before the Armstice that ended the war. In 1923 yet another brother Edward, a private in the Free State Army, died in a shooting incident in Longford. Mrs Fitzgerald was indeed unfortunate to lose four sons in uniform. Another Mohill born combatant, Patrick Nooney died at sea. The majority of war dead from Mohill  lie buried in Flanders or France where most of the Irish Units served. It is certainly unusual for soldiers to be buried in the graveyard of their home town. In Michael Reynolds case it is particularly poignant. Michael was gassed on the front and although he lingered on for months afterwards his demise was inevitable. He did however live long enough to make it back to hospital in Ireland and that is why his remains lie here. The landed gentry were also not immune from the bullets and shell fire. Hugh Crofton, a member of the landlord family who owned the town of Mohill died in Gallipoli. He is buried in Twelve Tree Copse overlooking Cape Helles, where the Dardanelles meets the Aegean Sea. Just another short journey from the war graves is an impressive headstone to a Sergeant Joseph Bruen of the RIC. Bruen was from Drumraghool and was stationed at Henry Street Barracks in Belfast around the time of partition. He was a Catholic in what was an increasingly sectarian force. He was shot in an apparent robbery in April 1922.  This would have been one of the bloodiest months in Belfast at the height of the Pogroms. The atrocities committed around these times are still remembered to this day in that city. Some of the worst acts of violence were committed by the ‘Cromwell gangs’ who killed many innocent people, including children, in an effort to religiously cleanse parts of the City. It was said that many of the gang were members of the RIC and that Michael Collins had managed to get all their details. It is also said that Collins had planned a similar attack to the one that took out the Cairo gang in Dublin. Fate intervened however to these plans in the guise of Beal na Blath. The atrocities weren’t all confined to one side of the religious divide of course but one can’t help but think that this was not a nice place to be for a Catholic policeman in an RIC Uniform. 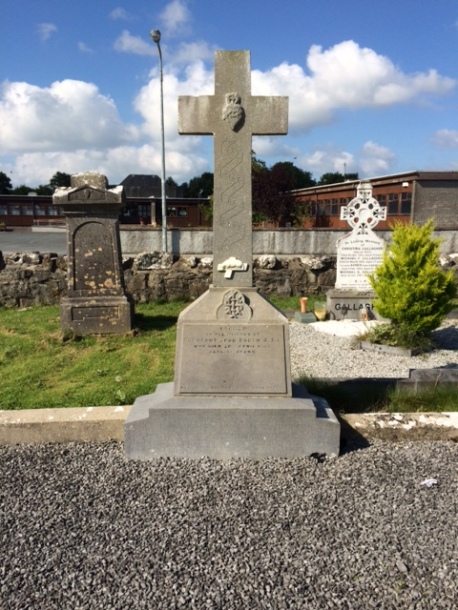 So as the sun shone down over the rolling drumlins of South Leitrim, and I find myself, janice –like, looking back through the medium of the names engraved on these grey stone slabs, I can’t but conclude that one doesn’t have to go to Glasnevin to experience Irelands troubled past. There is a lot of history to be found in the graveyard of every small town and village up and down this Island.  Alas for the unfortunate actors in this particular play I can only recall one more line from Thomas Gray’s famous poem – “For them no more the blazing hearth shall burn”.

1 thought on “Blog Entry written in a Country Churchyard”