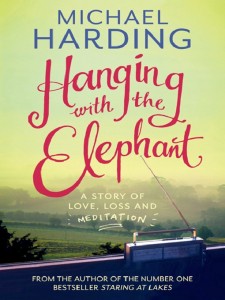 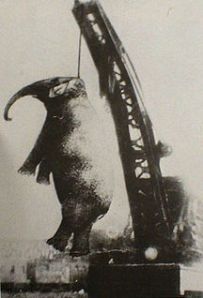 Search Engines have the habit of waylaying me (in the best possible way) and this evening was no different. I was looking up the wonderful Michael Harding’s latest work, ‘Hanging with the Elephant – or how not to meditate’ and simply entered the words ‘Hanging’, ‘Elephant’ and ‘Harding’ and found my target. It was only when I clicked on images in search of the book cover that I came across a strange and macabre sight. It was an adult Elephant seemingly hanging from a crane? Curiosity got the better of me and so I simply had to explore further and this is the harrowing tale that I now share.

The Elephants name was Mary and she was a five ton Asian female. She was part of Charlie Sparks’ revelling circus which was travelling throughout the near west in the summer of 1916. The Circus had just arrived in the town of Kingsport, Tennessee, USA in the month of September.  The circus staff prepared for the usual parade down the Main St., a spectacle that was sure to be the best form of advertisement for their upcoming show. An inexperienced handler called Red Eldridge was put in charge of Mary. Eldridge was a Hotel Worker who had just been hired the evening before the parade.

The parade was going normally when the elephant stopped to nibble on a piece of discarded watermelon. She slowed down and as one can imagine the whole parade had to stop when Mary stopped. Eldridge jabbed the elephant to get her moving and inadvertently hit an abscessed spot just behind her ear. The elephant’s reaction was deadly. The elephant grabbed her new handler with her trunk, lifted him in the air dashed him against a drink stand and as he lay dying on the road, issued the coup de grace by trampled on his head. Mercifully Eldridge was killed instantly. While the terrified spectators screamed and fled, a local blacksmith unloaded five rounds of ammunition into the elephant with little effect.

As Mary recovered her composure the townsfolk encircled her and someone shouted to the Circus people that the killer elephant must be put down.  Before long the crowd had started chanting “Kill the elephant, kill the elephant.” Mary was eventually subdued and brought back to the circus grounds. The only talk amongst the citizens was the murderous Elephant in their midst. Newspaper accounts did nothing but flan the flames of the public’s frenzy. A contemporary newspaper account said that Mary “collided its trunk vice-like about [Eldridge’s] body, lifted him 10 feet in the air, then dashed him with fury to the ground… and with the full force of her beastly fury is said to have sunk her giant tusks entirely through his body. The animal then trampled the dying form of Eldridge as if seeking a murderous triumph, then with a sudden… swing of her massive foot hurled his body into the crowd.” It should be kept in mind that female Asian elephants don’t have any tusks!

Leaders from nearby towns threatened that the Circus would not be allowed visit their communities. Worried that the circus dates would be cancelled if he did not accommodate the crowds call for vengeance the circus owner Charlie Sparks reluctantly decided to acquiesce to the mobs demands. The condemned animal was loaded on a railway car and brought to the nearby town of Erwin. A huge crowd had assembled in the Clinchfield Railroad Yard.

The unfortunate elephant was hanged from a railcar-mounted industrial crane. The first attempt ended in failure when the chain used snapped. Mary broke her hip in the ensuing fall. The second attempt was successful and Mary was buried beside the tracks. A vet who carried out a post mortem on Mary was able to show that she had a severely infected tooth in the precise spot where Red Eldridge had prodded her.

A study by the University of Missouri noted that “Nearly 3,500 African Americans and 1,300 whites were lynched in the United States between 1882 and 1968, mostly from 1882 to 1920.” Mary however was the only Elephant known to have suffered a similar fate at the hands of a vigilante Mob. Sadly there was no Atticus Finch on hand to save her life.

Incidentally the word ‘lynching’ comes from Galway. James Lynch Fitzstephen was the Mayor of Galway when he hanged his own son from the balcony of his house after convicting him of the murder of a Spanish visitor in 1493.

Finally, I purchased Michael Harding’s book and am looking forward to tucking into it; the critics say it is ‘A compelling memoir. Absorbing and graced with a deceptive lightness of touch, [Hanging with the Elephant ] is clever and brilliantly pieced together. Harding writes like an angel’